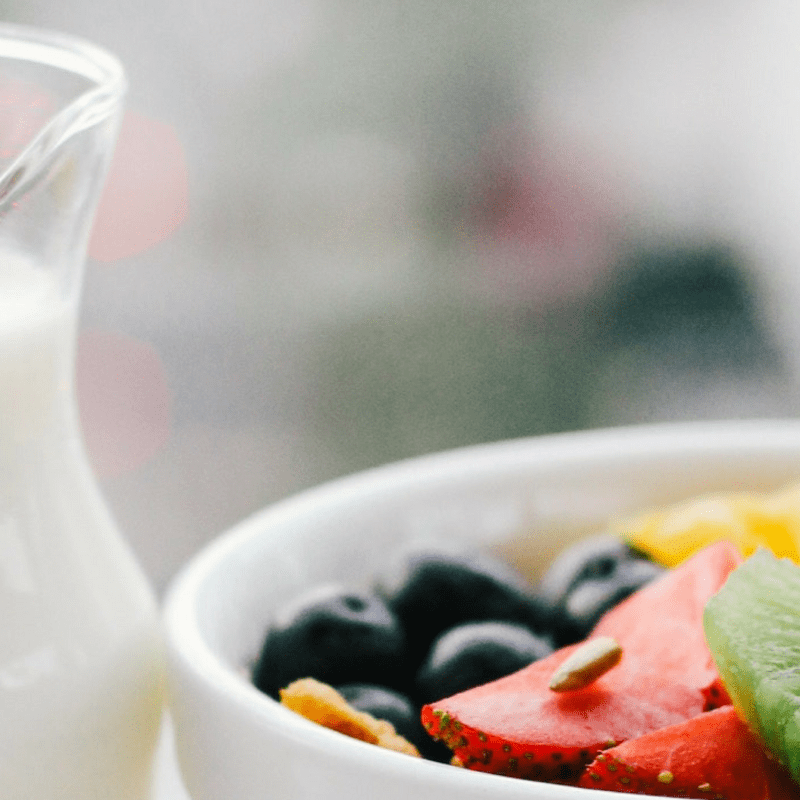 “Should We Be Eating Low-Fat Dairy?”

In this episode of Dear Dietitian we answer the question – “should we be eating low-fat dairy?” We also discuss what the Australian Dietary Guidelines say about dairy.
For our fellow dietitians, we also give you tips on how we as dietitians stay on top of the latest research.

Check Out These Highlights From This Episode:

Peta: 0.05: Should we be eating, should we really be eating low-fat dairy?

Tyson: 0.08: Should we really be eating low-fat dairy? So, the guidelines pretty much say over the age of two …

Tyson: 0.15: Still, the guidelines still say this yep, over the age of two you should be having low-fat dairy. And no full-fat dairy; full-fat before you’re two, nothing after. I think initially this was due to heart disease risk and dairy research around that, saying that if you have increased serves of dairy, especially full-fat, that the saturated fat contained in that would actually worsen heart disease and things of that nature, correct?

Tyson: 0.50: I’m talking about the reason why they actually said low-fat, that was the reason.

Tyson: 0.54: It was about the energy. So, they, they were talking about that. And then I guess new research has come out, probably over the last what, five years? Maybe longer, maybe less. Around that, the saturated fat contained in dairy doesn’t actually contribute to heart disease.

Tyson: 1.14: So, many other factors and then, there are certain aspects of dairy that they’re not quite sure what is causing that preventative effect from that saturated fat.

Tyson: 01.23: Some of it, but they don’t, there are other factors that they don’t particularly know yet and as we know, nutrition research is still a young science really. I’m always going to learn new stuff, which is why the public gets so confused all the time and we keep changing our mind about stuff.

Peta:  01.47: I don’t know you. Yeah, or yoghurt that’s unsweetened or doesn’t have fruit flavoured stuff added to it. So, essentially as food comes it’s generally quite low in disease risk. But it’s the other things, so maybe it’s the chocolate milk, or maybe it’s the cereal in the milk, or potentially it’s the crackers that you put the cheese on and even it’s the sugars in the yoghurt that you have. So.

Tyson: 02.10: Maybe it’s that bacon sandwich with cheese. Yeah, so I guess that’s what’s the guidelines kind of say and then obviously the research says this, so the guidelines have some catching up to do. But they always do, because that’s just the nature of it. They need to compile a lot of research to actually go into it, so they don’t actually keep up. And as a dietitian we have to make sure that we’re staying abreast of all the new research and adapting what we know, plus what we’ve learnt, putting it together and giving it to our client. So, in terms of …

Peta: 02.39: So, what would be the situation that you would advocate for low-fat versus non-fat.

Tyson: 02.43: Yeah so, I’ll still advocate for low-fat for pretty much all of my sports clients, a lot of them …

Tyson: 02.54: So, full-fat yeah, for disease risk. But I’m about to talk about weight management. I’m about to talk about how every athlete comes and they want to stay as lean as possible, while also gaining mass. Sometimes you can include that fat dairy, or full-fat dairy in, if they want to gain mass and they can’t eat enough. So, it’s a good little win. Because if we know it’s not going to increase heart disease risk, but it’s going to increase their calorie intake and then get them closer to their goal, sweet. But, other than that, if …

Peta: 03.22: What if you have someone that can’t tolerate dairy?

Tyson: 03.25: If they can’t tolerate dairy, get lactose-free milk. Pretty simple when it comes to that – seems pretty alright. Soy I don’t particularly like, so I don’t like recommending it unless people really like it. Plus, the protein contained in that is not as bio-available as what it is in dairy milk, which is why I choose it for athletes. Look it up. We can talk about it later.

Tyson: 03.50: But basically, I would recommend low-fat dairy usually. Like, especially yoghurt. Cheese, not, doesn’t matter to me as much because usually, they are not eating as much of it. And then milk, because a lot of these guys might, or girls, might be having two to three large glasses of it. I tend to cut back the calories in that so that I can bump it up in other things. So, if they are having additional carbohydrates elsewhere if they are having additional fats elsewhere through nuts and stuff like that. Those other fats, other than the saturated. Because even though it’s not contributing to heart disease, it may not actually be cardio-protective either. So, there are things to be aware of. And that’s kind of how I look at dairy, yeah.

Peta: 04.37: Yep, there was also good research last year in relation to the vehicle of that dairy food. So, like I’ve already eluded to in relation to the sugars and the carbohydrates, and things like that. You know, potentially things with cheese are everyone thinks cheese is obviously not good for them. If you take the fat out of cheese, it’s really not cheese. It’s supposed to be a …

Peta: 04.57: High-fat product. It’s, you know, flaky rubber and people throw it around, it’s got no flavour. So, yeah so, I suppose when it comes to cheese, cheese finds its way into everything. Early on, you know, when they had an influx of milk because dairy farmers decided that hey, let’s just you know, make shit loads of milk. You know, there was a lot of by-product of that and so therefore you know, America decided “Wow we’ve got way too much milk, let’s just shove cheese in everything.” And so, therefore, it became in processed cheese snacks and burgers, and anyway, I could go on.

Peta: 05.36: But, if you were to say do it the French way and you say had a small amount of you know, brie or camembert or something like that, and you were having it as part of a platter with lots of veggies and stuff like that on it, and you were eating it in an appropriate way. Versus putting it in your wraps, your sandwiches, you know, your snack foods that are cheese-flavoured. Then in that way, it’s probably reasonably healthy to include in a diet, that doesn’t need to be a low-fat form. So, and even in the guidelines per se, they do suggest you can have up to two to three serves of full-fat cheese per week and there’s no issue. But if it’s finding its way into every single meal or snack, and you’re having that daily then I’d probably suggest that you do choose a really bland, low-fat cheese. Or decrease the frequency of having a really tasty cheese.

Peta: 06.16: Yeah, well you know. That’s when can manipulate the recommendations to suit. But yeah, at the end of the day I suppose that’s what I’m coming at. Is that yes, we have those guidelines, but then you need to change the … if you’ve got someone that obviously needs to put on weight …

Tyson: 06.31: Yeah, then you can add it in without too much thought around any further disease implications. It’s more around just trying to reach your calorific goals.

Peta: 06.40: And what about in the elderly population, that you would work with?

Tyson: 06.42: Oh yeah, smash em. I would, I was saying the other day I, pretty much every client that comes to me that wants to gain weight is at least three to four serves of dairy in that. And in the older population, obviously, we know that the calcium needs are a lot higher. Bone health and all of that. But in terms of gaining weight, dairy is a good vehicle for high-biological value protein. So, you can get a good smack of protein in a serve of dairy. So, that’s an easy vehicle, especially if they like drinking milk or they love cheese. Like, it’s a good vehicle for that protein. So, that’s kind of why I would do it with an older population, the same way that I would do an athlete. I kind of treat older people who want to gain weight similar to an athlete, really. In terms of what I’m giving them and making vehicles really easy to consume, so they can consume more. Because we know, older people don’t tend to have the best appetite, especially if they’ve been losing weight unintentionally. And athletes often can’t eat enough to reach their goals, so both kind of work hand in hand and that’s how I would use it. But yeah, at least three times a day. At least.

Peta: 07.51: Is there anything behind weight gain and milk, as in … so, for example, when my child is little and maybe still now. She’s on milk, so you know, is there any effect of saying you know, hormones in milk that stimulate or promote more gain because actually it’s supposed to be growing little humans and little calves?

Tyson: 08.14: Are you talking about growth factor?

Tyson: 08.23: I would say that’s minimal in comparison to the protein, the carbohydrate and the calories that will be coming in. I don’t even factor that into my thinking whatsoever. I don’t think it’s necessary. That’s my answer to that.

Peta: 08.39: There are always, no but there are always questions are good and I suppose as a dietician you’ve got to potentially expect the unexpected in some of the things that people might ask you, we’re like …. and good poker face Tyson, because that’s exactly the face that I would do sometimes. I’m like oh yeah, that’s interesting.

Tyson: 08.56: Yeah, because you think about like, I don’t really, that doesn’t sound right to me but I’m just going to be confident in my delivery of what I thought is the truth. And now that …

Tyson: 09.14: Because I know. Because I know, and I know the other science around protein and calories and gaining weight and the results that I’ve got with clients, so. I’m confident with answering with it, even though I know Peta’s probably a little bit smarter than me.

Peta: 09.32: So, get your clients on dairy. It works really well. If you can modify the size, as well as maybe the type sometimes, it’s more beneficial than say, for example, suggesting an alternative. A lot of people that come and see me are not having much dairy at all, apart from yogurt and really won’t have standard milk. But if I’m seeing someone for weight management, you know, particularly I always emphasise have a coffee in between meals, it’s portion control, there’s not really any sugars – you don’t need them, because it’s quite nice if you get a good one. So, I really advocate things like that …

Tyson: 10.13: So yeah, long story short. Low-fat or full-fat, doesn’t really matter. Depends on your requirements, depends on your needs. But in terms of heart disease risk or anything like that, which is why the initial guidelines were developed around low-fat, that’s kind of out the window now. Forget it. Move forward.

What’s your take on dairy? Do you agree or disagree with what we’ve suggested?

Share your thoughts via any of our online channels.

Be notified of the latest updates or membership offers. Zero spam guarantee!